Kiki deVille Uses Her Communication Skills On The Voice 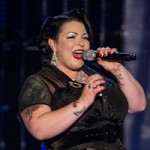 It’s great when we see delegates on a Four Steps Training programme putting their skills to good use. So it was pleasing to see Kiki deVille performing recently on BBC’s The Voice.

We were rooting for Kiki all the way after her fabulous audition.

Kiki put her singing and communication skills to good use as she landed herself a place on Team will.i.am and also graciously acknowledged the skills that she had learned from Four Steps.

Despite losing out at the battle stage of The Voice to James Byron, we just know that Kiki is going to go from strength to strength in her singing career. You can follow Kiki at www.kikideville.com.

This site uses Akismet to reduce spam. Learn how your comment data is processed.